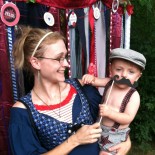 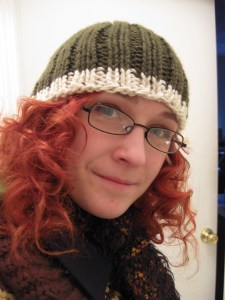 I’m festive for the holiday season now! This picture isn’t the greates, as far as color representation is concerned. I think my red is a bit redder than this picture. I’m not interested right now in going in with Photoshop to get things “just right”. This is good enough. I do have more pressing things on my to-do list.

I’m SO happy with it! I put curlers in for a night too, and it came out SO cute. Who says doing your hair at home is a mistake? I’m very happy! My mom probably won’t be…but …come on! I’ll be red and green for Christmas : )

I got all my commission work done, so now I can focus entirely on fruits and veggies for the Vegetable Circus. I’m so excited to see them all sitting together in one giant pile. I’ll post pictures as soon as they’re done.

I can’t believe I got ALL the Christmas work done before Christmas! I think even as far as my personal life goes I’m

just waiting on shipping now. Then I’ll be able to wrap things up and be done! I didn’t do cards this year, but that’s ok. I’ll try and remember to make my phone calls to the grandparents and people I can’t be with in person.

We didn’t have a Christmas Tree this year. I wasn’t really interested in going through all the trouble of moving the furniture, finding one, cleaning up after wards, etc. I DID really want something green and pine-y to put our pile of gifts under. This is my compromise/solution ————->

I took a few walks and collected (before all the snow feel onto everything) one evergreen branches. I looked for ones with a slightly long “stem” so I could put them into a vase. I was actually looking mostly for the “scraggly” branches. Small ones with only needles on the ends. I cut a few from trees, but found most of them on branches that had already fallen.

I found some twigs on my walk also and brought them home with me. After I pruned the evergreen to the way I wanted them I arranged the branches in a 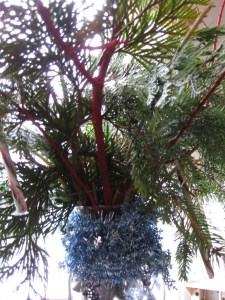 vase. I laid newspaper on the floor and put out my twigs. I painted each one carefully, either gold or red. I left the ends plain so that the paint wouldn’t seep off when I put them into the vase. I can’t find any decorations to put on the tree, if I have any, but I don’t even know if it really needs them. I put some candy canes on, because I have them. But in the end I’m VERY happy with my Green alternative. No trees died in the making of this Gift Guarder.

I’ve even had time to have FUN in the last week. Rob had a birthday and we had invited people over for a day of games, but instead we woke up to a fantastic snowstorm. No one could make it. Until Rob’s brother called and said he was coming over, in his 4-wheel drive vehicle. HOORAY!! We all had a great time. Brownie sundaes were consumed. Games were won. Rob and I played in the snow before Taylor came over and I managed to take some pictures of that too… 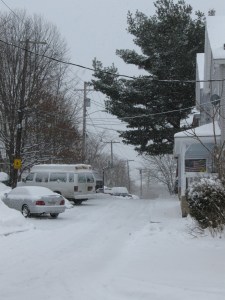 I spy with my little eye…an American Flag in the snow. 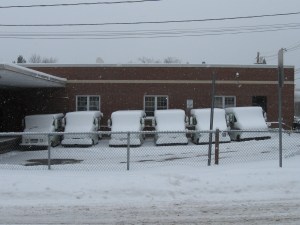 Huddled together for warmth, I’m sure. 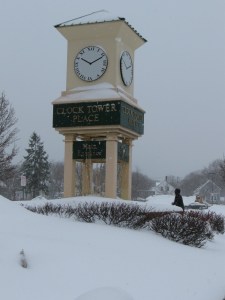 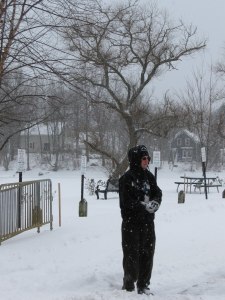 Rob threw snowballs, but VERY KINDLY…none were at me. Huzzah! 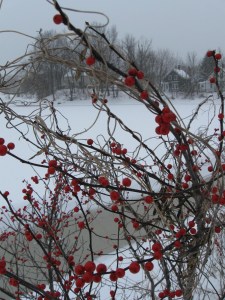 ^This might be my ^favorite picture^ from this snowstorm^ 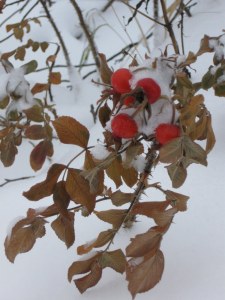 Rosehips in the snow. 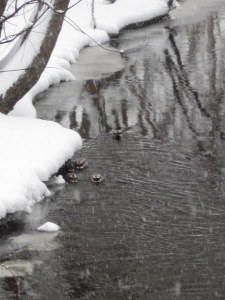 I think this picture is great, the Men all leading the way, and breaking the water for the Women
\/ 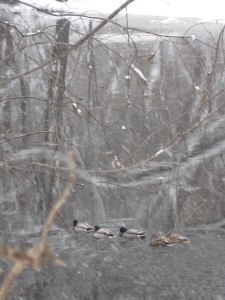 This entry was posted on December 23, 2009 by everyinchwithcare in Christmas, Red Hair, Snowstorm Slideshow, Tree alternative.